This week’s post is written by archives volunteer Kari Roueche.

The original photographs published in the 1976 book Historic Sites of Sullivan County are contained in the Muriel C. Spoden Collection (KCMC). Lately we’ve been slightly obsessed with trying to find these historic structures and discovering their current condition. This week, we tackled Chapter I, “Reedy Creek and Bloomingdale Environs.”

Our search began just west of the intersection of Bloomingdale Rd. and John B. Dennis/Wadlow Gap at the John Thompson House.

Part of a 1780 land grant, Thompson built the house just after 1809 on 180 acres that had three previous owners. The Red House name was given after Thompson sold the home to Thomas Hopkins.

John Ketron (or Kettering) was born in Virginia to German immigrants. He settled in the log home, now covered in siding, around 1790. The house was still owned by Ketrons at the time HSSC was published.

Ketron land was part of the 1772 Reedy Creek Settlement. This 33-acre parcel was separated from the main tract in 1874 for Sarah Ketron and her husband David Hobbs. The log dwelling was occupied by sisters Fannie and Eula Gaines at the time the above photograph was taken.

The two-story portion of the dwelling was possibly built by Robert Green from land purchased from the Hicks family in 1844. The single-story addition was added by John Green during the Civil War. Green’s daughter Susie married Melvin Hicks and the couple lived out their lives in the home. Their descendant, Mabel Hickam-Nottingham was living in the home at the time HSSC was published.

Thomas Fain (1809-1898) began building on the land, including 6 log structures, a post office and, eventually, the main house, in 1836. He and his wife Rachel christened their land, which stretched from the Virginia state line to the Chestnut Ridge, Arcadia.

The grist mill is on land that Andrew Leslie purchased in 1851, but a mill is likely to have been at this location as early as 1827.

John Roberts built his home about 1773. On September 24, 1774, John, his wife, and three of their children were killed in an Indian attack. Another son was taken prisoner but eventually returned in an exchange. A fifth child was seriously wounded and eventually died of his injuries.

Update: At the time of this blog’s publication, the cabin was dismantled and the land fenced. However, another, very old photograph of the cabin was located within the Spoden Collection and is included below. 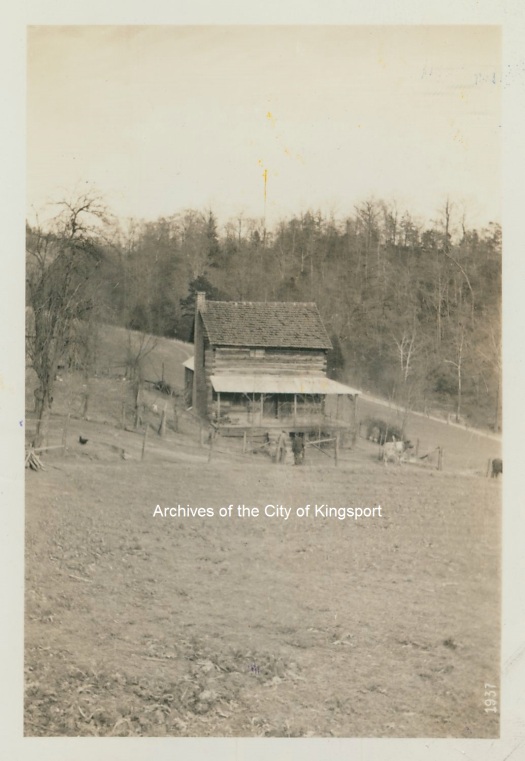 The Sullivan County Historical Commission did not document every historical structure in the county during the 70s, and the archives does not retain every photograph taken at the time, but their work was remarkable and, we think, worth re-visiting. Patrons are welcome to examine the collection.

38 Replies to “History in Bloom(ingdale)”

The photographic images on this site are the property of the Archives of the City of Kingsport and are governed by U.S. and International copyright laws. Please contact the archives for permission to use images or request reproductions.